One year ago, we gathered our community together to share their vision for an expansion of the Fire Station Community Center Park at 1616 Hemphill in a multi-day workshop. Following the workshops, a Fire Station Park expansion survey continued to collect additional public feedback. Among those elements receiving the strongest support from the workshops and survey were a skate park, pump track, dog park, flexible spaces for farmers markets and public events, interactive features for all ages, and well-shaded areas for relaxation.

NOW IT IS TIME TO REVEAL THE EXPANDED PARK CONCEPT PLAN

The plan was prepared by consultants from Project for Public Spaces. We invite you to join us on Wednesday, December 6 at 6:00pm at the Fire Station Community Center to review the draft plan and share your feedback.  With a groundswell of public support for a community center expansion, it is critical that the Fire Station Park expansion plan considers both the current and future facilities, parking needs, and programming opportunities. Please invite your neighbors and spread the word about the importance of this meeting. 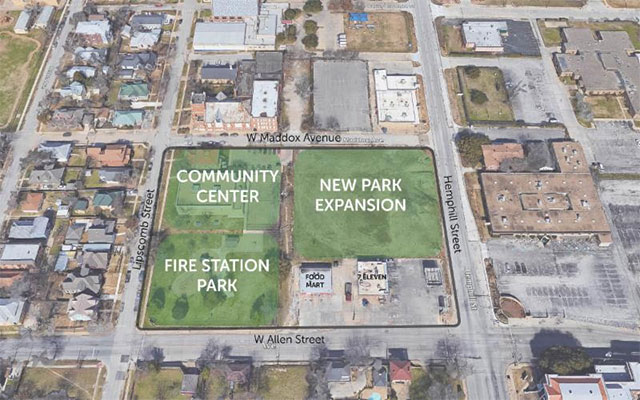 Who are the partners behind Envision Hemphill?
A strong coalition of community groups has been working together for over two decades to promote improvements along Hemphill and throughout the Southside. The Hemphill Corridor Task Force, Near Southside, Inc., Historic Fairmount Neighborhood Association, I-CARE, Tax Increment Finance District #4, and the City of Fort Worth are the primary workshop partners, with additional support from LegacyTexas.

What specifically is the focus of Envision Hemphill?
Envision Hemphill is an ongoing effort to influence the design and function of:
Expansion of Fire Station Park at 1616 Hemphill - Efforts are underway for a design and programming plan for the currently vacant parcel at Hemphill and Maddox that would add over an acre to the existing Fire Station Park and integrate a seamless experience across both parcels into a combined community space.
Hemphill Street between Vickery and Biddison - Last year's Envision Hemphill workshops generated hundreds of responses showing strong support for protected bike lanes, safe crosswalks, on-street parking for retail, and other street design elements. Virtually all participants agreed that the current configuration is not working well, with Hemphill being unsafe for pedestrians and cyclists and failing to promote new business activity and mixed-use development. We hope you'll stay apprised of our efforts to improve the street.
Who are the experts leading the efforts?
Project for Public Spaces is the international leader in creating vibrant parks and plazas that serve as treasured hubs of community life. PPS also leads a paradigm-shifting "streets as places" initiative aimed at creating streets that not only provide vehicular circulation, but function just as well for people riding bicycles, walking to school, shopping at local stores, or catching the bus.
HDR Engineering is the highly qualified multi-disciplinary firm that led the recently adopted update to the City of Fort Worth's Master Thoroughfare Plan (MTP). The updated MTP created a new set of street types that allow for the type of "complete street" design approach contemplated for Hemphill. HDR's familiarity with the MTP and leadership in promoting a new approach to street design made them an ideal match to oversee traffic engineering efforts for Hemphill.

Will street changes happen soon?
Yes! HDR Engineering has made great progress on the "rightsizing" plans for a reconfiguration of Hemphill between Vickery and Hammond, continuing to work in close collaboration with NSI and the City's TPW department. Plans should be completed over the next couple of months. The next step is to secure all funding for the installation of those new markings and schedule the street resurfacing, ideally for 1st or 2nd quarter 2018. Plans are consistent with the primary recommendations from the Envision Hemphill workshop, including crosswalks and other pedestrian safety improvements, parking to support adjacent businesses, dedicated bicycle lanes, and turn lanes at intersections to facilitate efficient circulation.

Will park improvements happen soon?
Not as quickly as the street re-striping, but yes! There will be additional design steps required between the public meeting and the start of any construction, but the City has already allocated funding for the park's final design and the first phase of improvements. The conceptual plan and programming recommendations that come out of the meeting should directly shape those initial improvements and any future phases.
How can I help? How do I spread the word?