After more than 5 years of dreaming, designing, and fundraising, our Near Southside community is ready to start the final chapter of the Fire Station Park project - CONSTRUCTION!

Near Southside, Inc., the City of Fort Worth, and Dickies, the Fort Worth-based global workwear brand and original apparel of choice for skateboarders, has announced construction of the Dickies Skate Plaza at Fire Station Park and Community Center. The 15,000 sq. ft. skate plaza will be the showcase programmatic element within a larger public park expansion project and will feature a diverse range of obstacles for skateboarders of all skill levels.

To celebrate the beginning of the construction phase, Dickies and Near Southside, Inc. will host a community event featuring local Fort Worth elected officials including Elizabeth Beck, City Council Member for District 9. Local children from the Fire Station Community Center’s after school program will also celebrate the kickoff of the project.

Join us for a hot cocoa social with beignets, remarks from project leaders and partners, and an exciting donor announcement from Dickies that you won’t want to miss! All are invited to attend so please help us spread the word to family, friends, neighbors and community members.

Parking is available along the street on Maddox Avenue, Lipscomb Street and Hemphill Street surrounding the Fire Station Community Center and Park. In addition, our friends at Southside Preservation Hall have offered the use of their parking lot on Maddox Avenue.

In early 2016, Near Southside, Inc., joined by the Hemphill Corridor Task Force and neighborhood groups, led the effort for the City’s acquisition of a vacant parcel of land at 1616 Hemphill adjacent to the Fire Station Community Center in the Fairmount neighborhood of Fort Worth.

In December 2016, Near Southside, Inc. and consulting partner Project for Public Spaces (PPS) held the first Envision Hemphill workshop inviting community members to share their dreams for the park’s master plan. Hundreds of Near Southsiders expressed strong support for an urban skate park as a primary feature alongside a bike track, central green and market plaza. At each of these meetings, the skateboarding community arrived in force, expressing their support for the park expansion and passionate belief that it should include a skate park. It was encouraging to see this vision was also supported by so many non-skaters and longtime residents, as they saw that the skate park could coexist with other park elements and strengthen the park’s overall appeal.

Fort Worth’s skateboarding community is growing, with participants ranging in age from 5 to 65, all eagerly awaiting the moment when Fort Worth will have a more centrally-located skate park. Currently, the closest is approximately 13 miles away via toll road, which is not always an option for the young people who need it most. Meanwhile, each year, this community works over many months to build a temporary skate park in use for one day at Open Streets, an annual spring festival that closes down Magnolia Avenue. Thousands of skaters gather for a skate jam that stretches over two blocks of Magnolia, and showcases – in spectacular fashion – the hard work and community spirit of the Near Southside’s skateboard community.

In December 2017, Project for Public Spaces presented the first-draft concept design for the park expansion to over 150 community members at the Fire Station Community Center to share their thoughts and feedback on. Once again, community members provided their input on things such as design aesthetic, materials, and programming features of the park.

This master plan reflects ideas expressed by the surrounding community and presents a park that provides enjoyment for all users, with primary features including an all-wheels track, central green, market plaza dog park, and most importantly, the skate plaza that received such strong support throughout the public meetings.

In 2018, PPS delivered an implementation report for the expansion of Fire Station Park.

In early 2019, the City of Fort Worth officially adopted the community-supported Fire Station Park master plan and allocated $200,000 in park dedication funds towards phase 1 design and development.

By the end of 2021, design drawings were completed, and the goal of raising $600k had been met. City of Fort Worth began the process to allocate an additional $400k, which completes the overall park construction budget at $1.6M, and officially kicks off the construction phase. 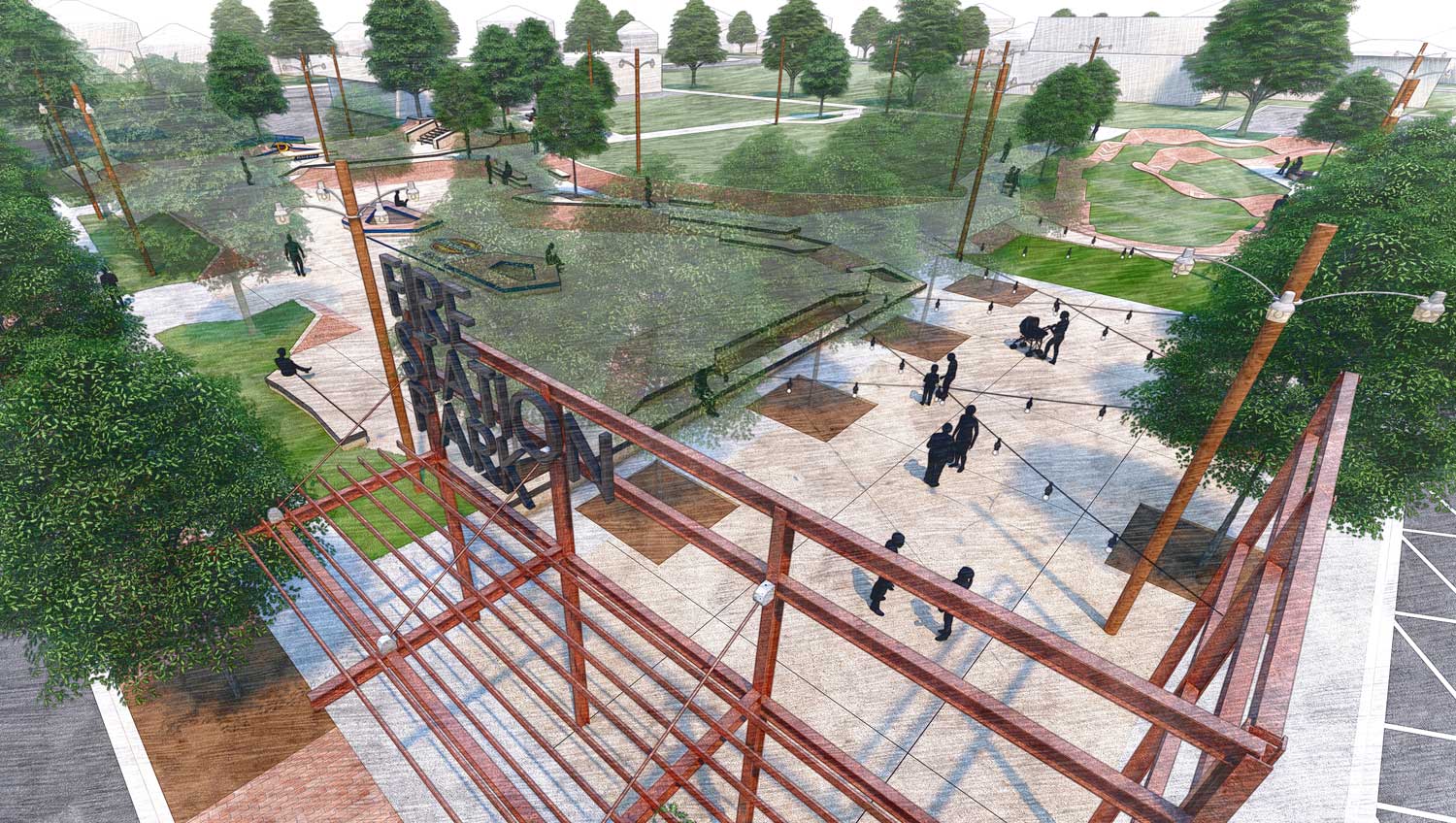 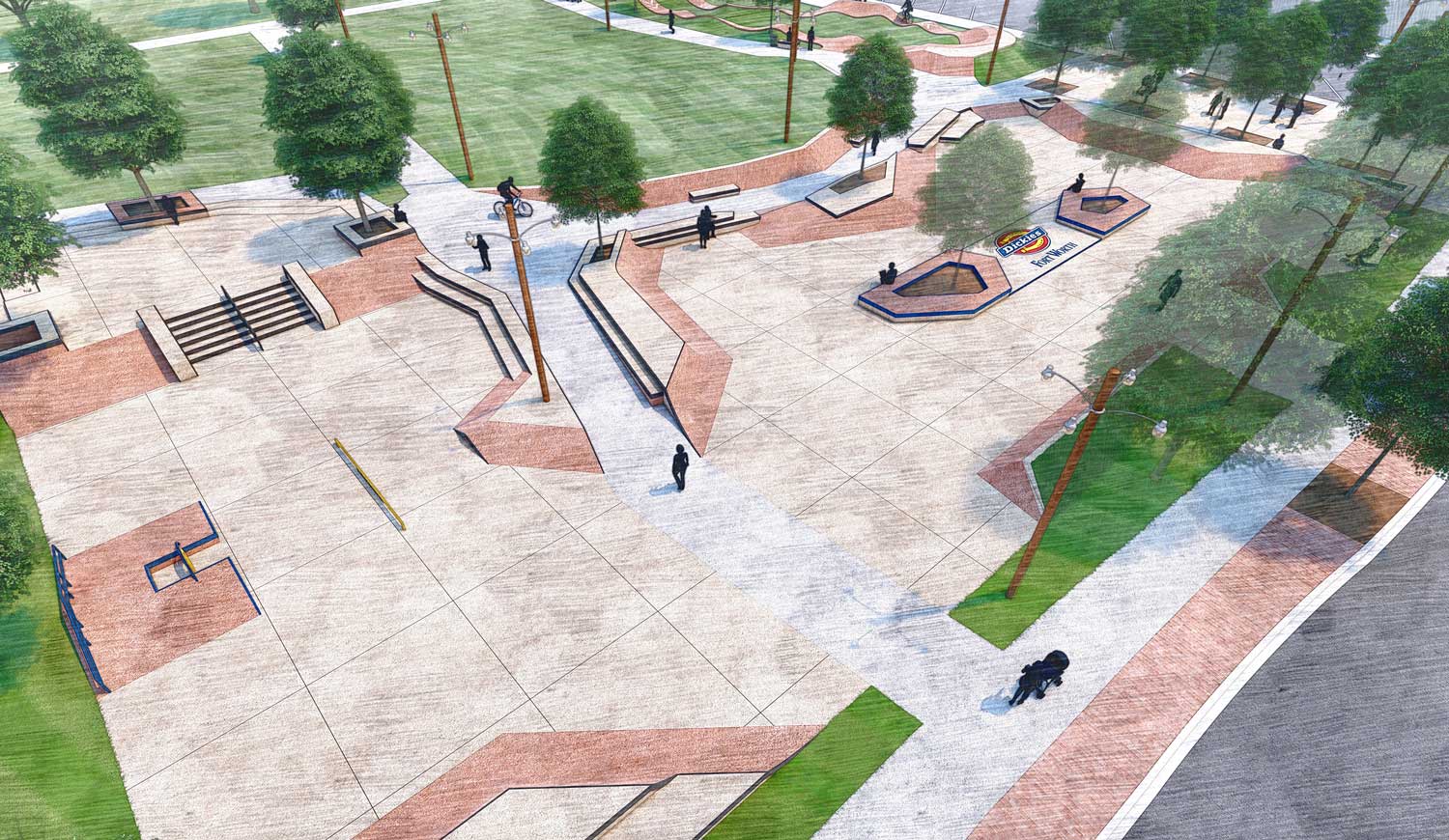 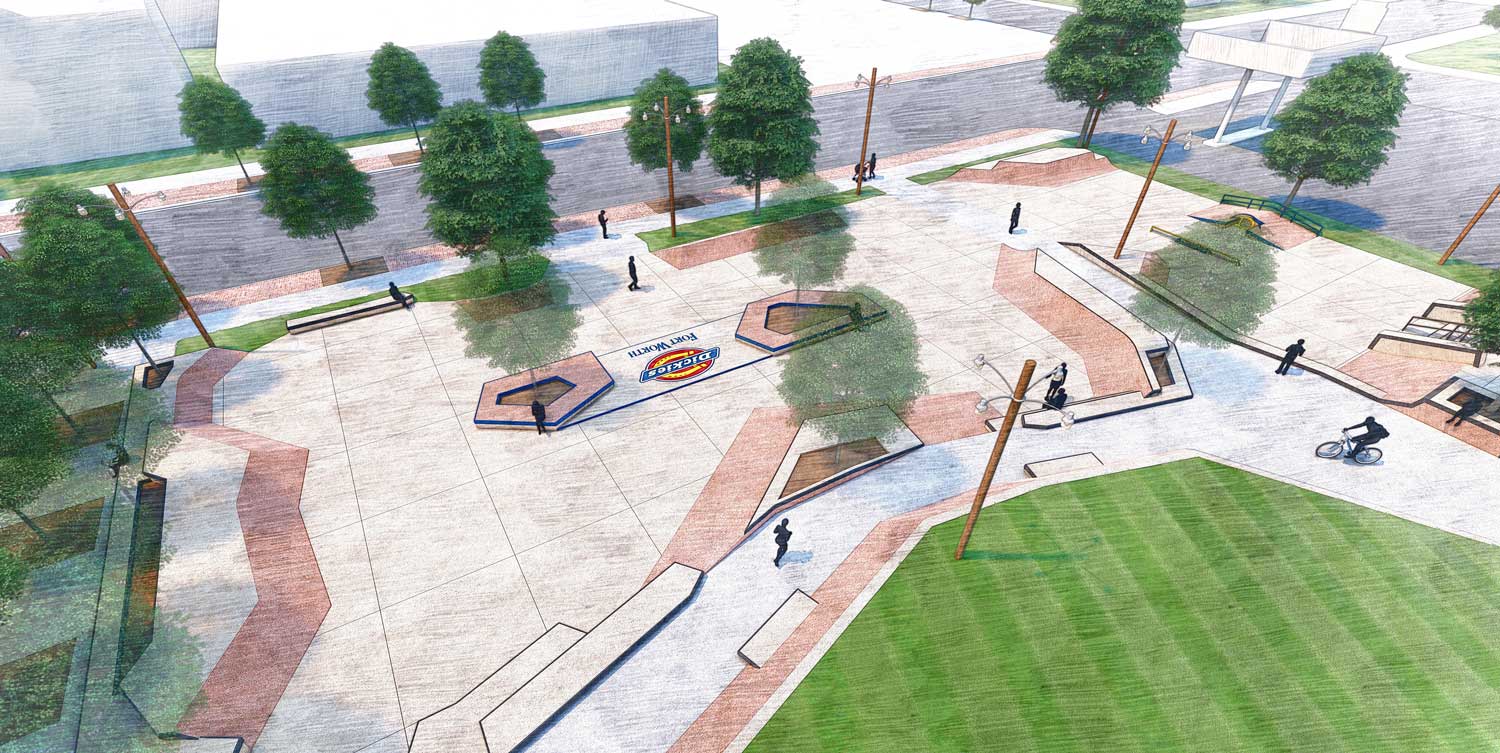 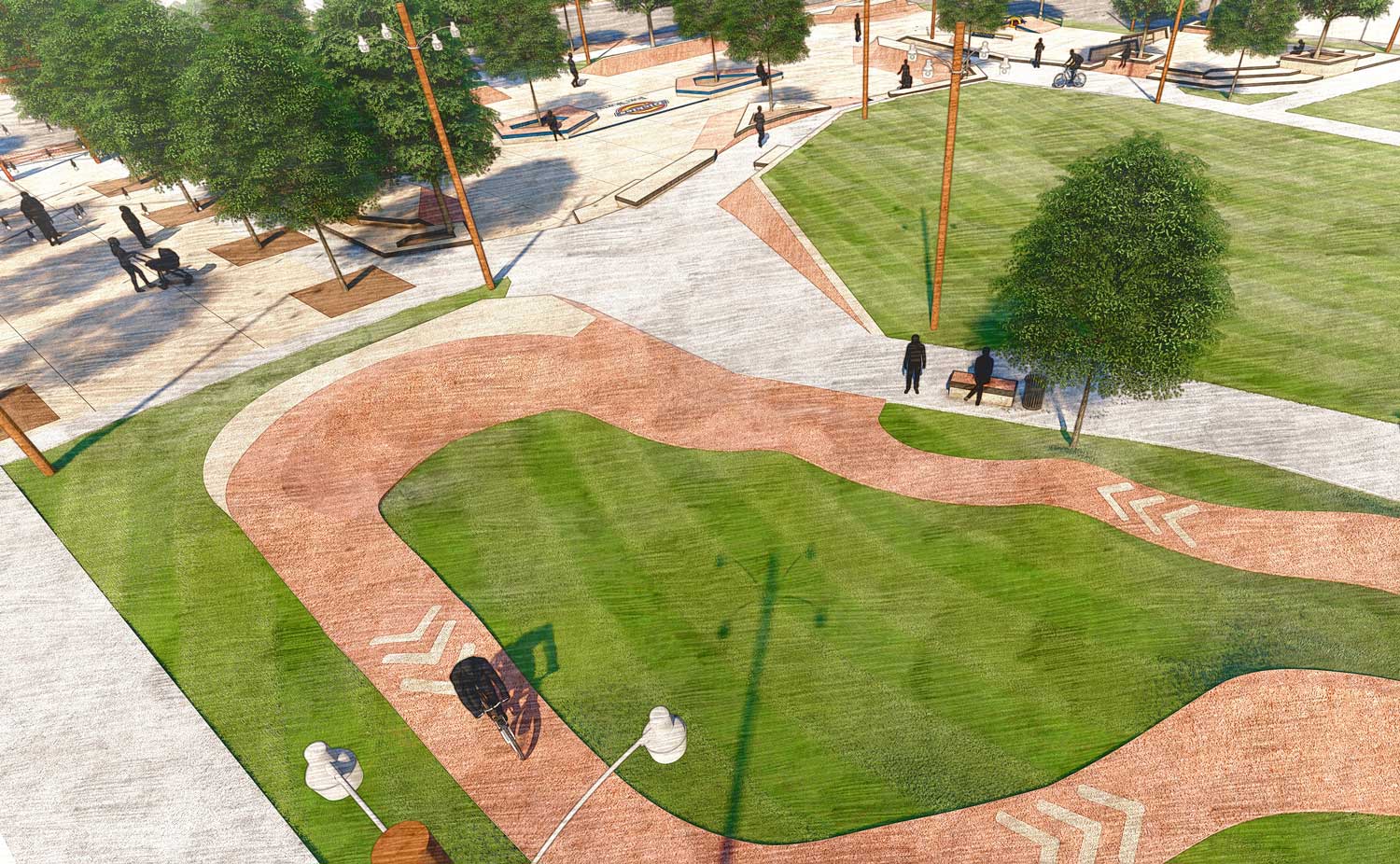 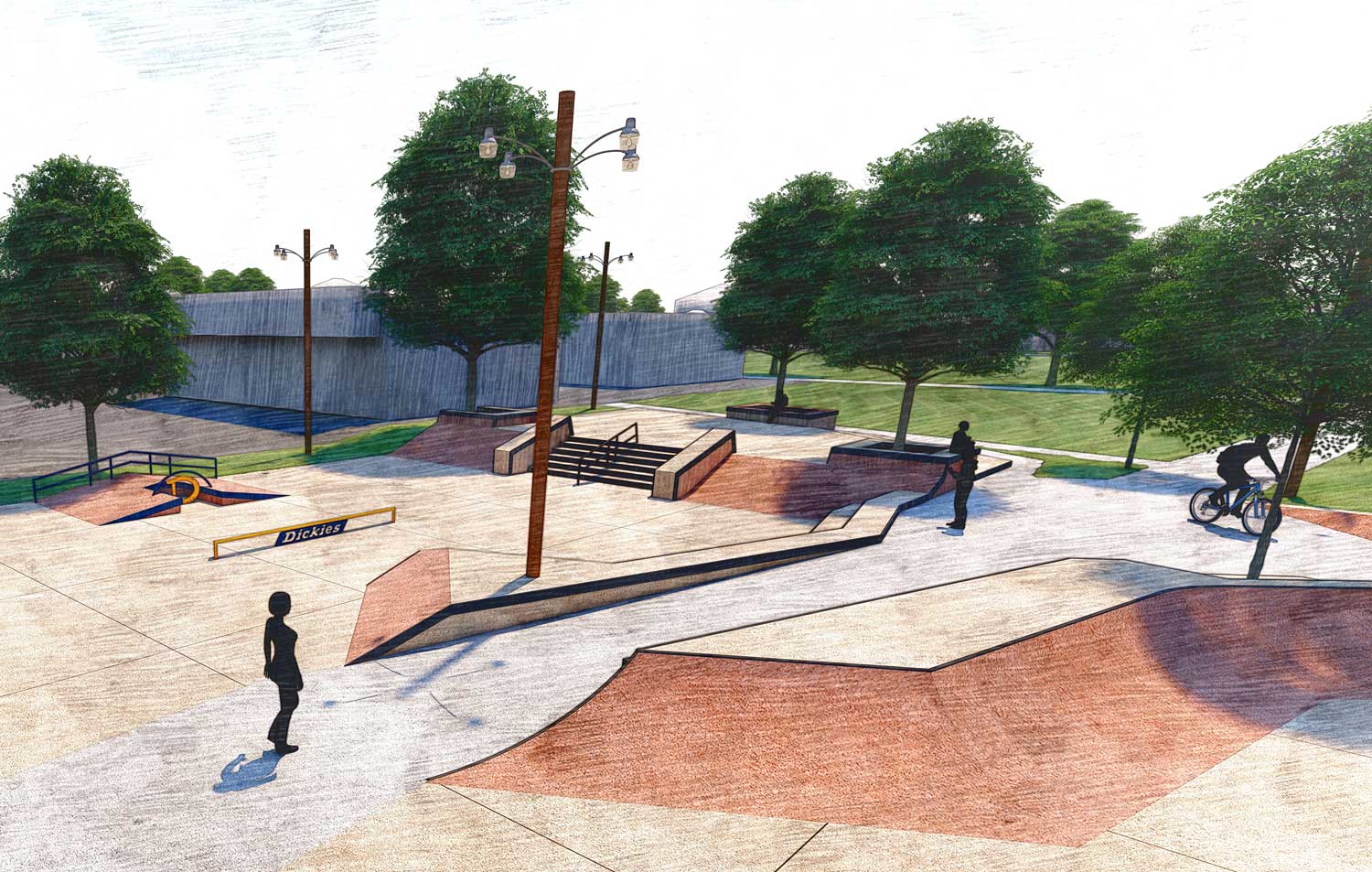